In the last chapter, you have had a basic understanding of R objects and how to do object assignments. From this section, we will start to introduce the first and perhaps the most fundamental R object type, called vector. Vector is the simplest object type in R, which contains one or more values of the same type. We will introduce numeric vector, character vector, and logical vector in this section. Let’s begin with numeric vector.

After assigning the value 6 to the name x1, you have created a new vector x1 with the same value as 6, so x1 is also a numeric vector. And you can refer to x1 in the subsequent calculations.

But can a numeric vector contain more than one values? The answer is a big YES! In R, you can use the c() function (c is short for combine) to combine elements into a numeric vector.

In this example, you have created a length-5 object using the c() function with arguments containing the five elements separated by comma. Since the value of each element is a number, the object is a numeric vector.

If you assign the values to the name y1, you will get a new numeric vector y1 with 5 values. Notice that the second and third elements have the same value 3 in y1. You can verify the contents of y1 and check the length of it through the length() function.

When you assign several values to a name, the order of the values will not change after assignment. If you create two numeric vectors with same numbers of different orders, these objects will have different values. For example,

After creating vectors, you can use the function class() to check its class.

From the results, you will know that x1, y1 and z1 are numeric, which is the reason why they are called numeric vectors.

b. Extract vector element and update its value To extract an element from a vector, you can use the index of the element with a pair of [ and ] surrounding it following by the vector name.

You can also update a particular element of a vector by using the assignment operator with the extraction expression on the left and the new value on the right.

As you can see here, the second element of y1 is changed to 100, which is reflected via checking the value of y1.

Since numeric vectors are made of numbers, you can do arithmetic operations between them, just like the fancy calculator in Section 1.2. If two vectors are of the same length, the calculation is done elementwisely. In other words, R will perform the operation separately for each element. First, let’s create another vector x2 of length 1 and do addition with x1.

Then obviously you will get 9!

Similarly, you can create another vector y2 of the same length as vector y1. Then, you can do operations between y1 and y2.

Since the calculation is done elementwisely, people normally would want the two vectors to have the same length. However, there is a recycling rule in R, which is sometimes quite useful and enables us to write simpler code. Specifically, if one vector is shorter than the other vector, R will recycle (repeat) the shorter vector until it matches in length with the longer one. This recycling is particularly helpful for an operator between a length>1 vector and a length-1 vector. Let’s see an example.

From the result, you can see that each element in y1 is added by 6.

The followings are a few additional examples you can try.

Let’s first create a character vector sheepstudio which only has one element. You can then check the value of this vector by typing its name and verify the vector type by using class().

Double quotes need to be paired in strings. If you miss the right double quote, R will show a plus on the next line, waiting for you to finish the command. If this happens, you can either enter the matching double quote, or press ESC to escape this command.

Note that if you have a vector consisted of numbers with surrounding double quotes, it is also a character vector. (“4” and “29” are strings)

b. Concatenate several strings into a single string

Next, we will introduce how to concatenate several strings into a single string. To do this, you can use the paste() function. First, let’s create a character vector with four elements,

If you don’t want to use a separator, you can use the paste0() function.

If you would like to concatenate the strings of a vector into a longer string, you need to specify the collapse argument as the separator instead of sep in the paste() function.

In addition to paste several strings into one long string, you can also use the paste() function paste two character vectors, where the pair of strings will be pasted elementwisely.

In character vectors, each string can contain both uppercase and lowercase letters. You can unify the cases of all letters inside a vector. Let’s review the character vector four_strings at first,

Then use the tolower() function to convert all letters to lower case,

The opposite function of tolower() is toupper(), which converts all letters to upper case,

So far we have created several numeric vectors and character vectors. Some vectors have names, and some do not. You can see all the named objects by using the ls() function.

As introduced in Section 1.3, another way to check the named objects is via the environment panel as shown in Figure 2.2. 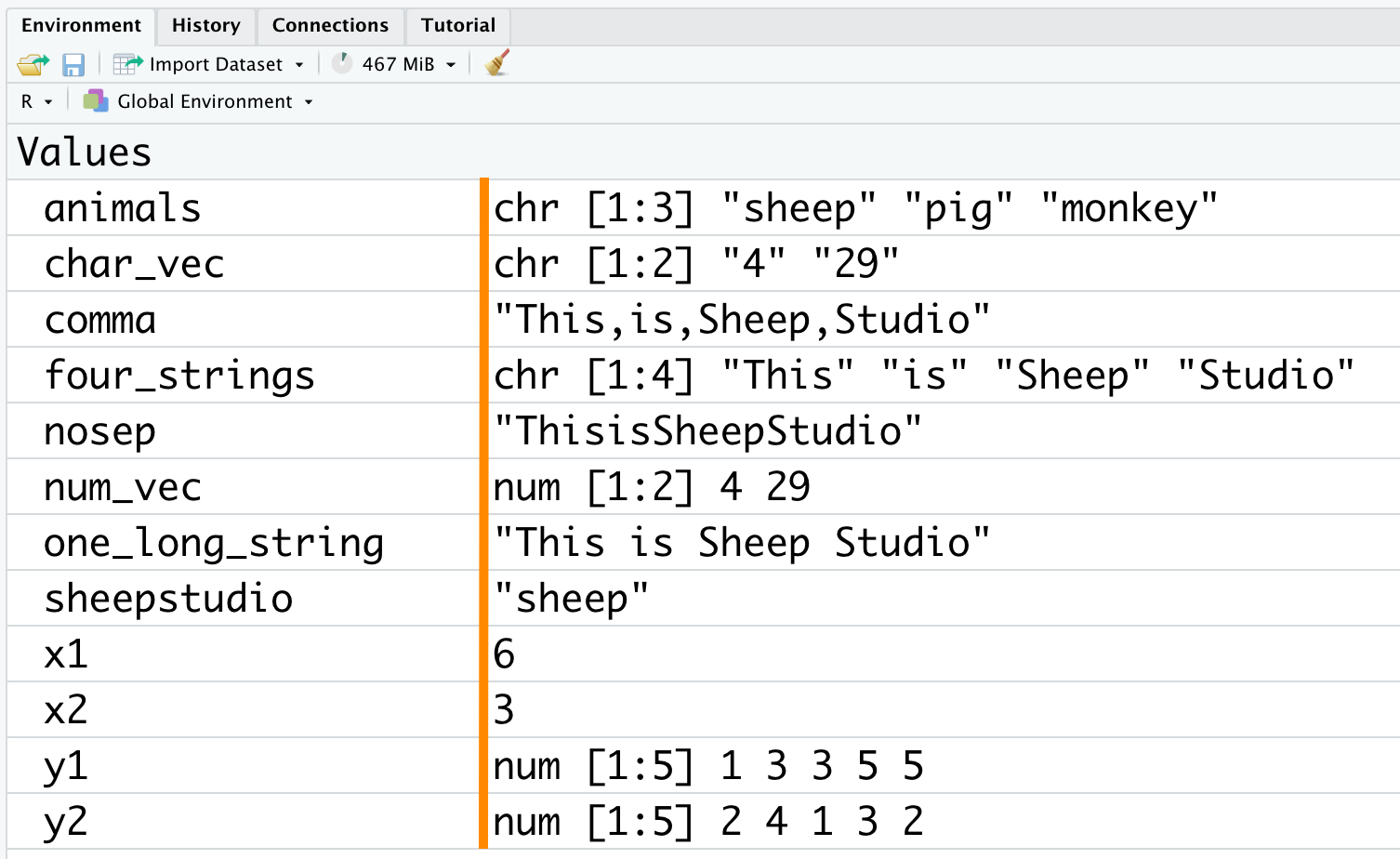 By now you have created several objects, and you will find that the objects will not be saved in R if you don’t assign their values to names, for example, the results of x1 + x2 and y1 + y2 are not shown in the environment.

Before introducing the logical vector, let’s first learn a function called is.numeric(), which checks whether a vector is of numeric type,

Similar to is.numeric(), you can also use is.character() function to check if the given vector is of character type.

You may notice that results are TRUE or FALSE from the above codes. Actually, logical vectors are vectors that only use TRUE or FALSE as values. Note that TRUE and FALSE are logical constants in R. Similarly, you can use is.logical() to check if the vector is of logical type, or you can use class() to find out the exact type.

It is worth to point out that you don’t want to put a pair of double quotes around TRUE or FALSE when you use them as logical values. If you do that, a character vector will be generated instead.

Note that the keywords TRUE and FALSE are case sensitive, and all letters inside them need to be in upper case. If you change any letter to the lower case, you will get an error, because True is neither a logical constant nor a defined object.