In Section 4.10, we learned how to use geom_bar() to generate bar charts for visualizing the distributions of discrete variables. You may be wondering, how about visualizing continuous variables? One popular plot is called histograms.

To generate a histogram, you can simply use hist() with the variable as the argument. 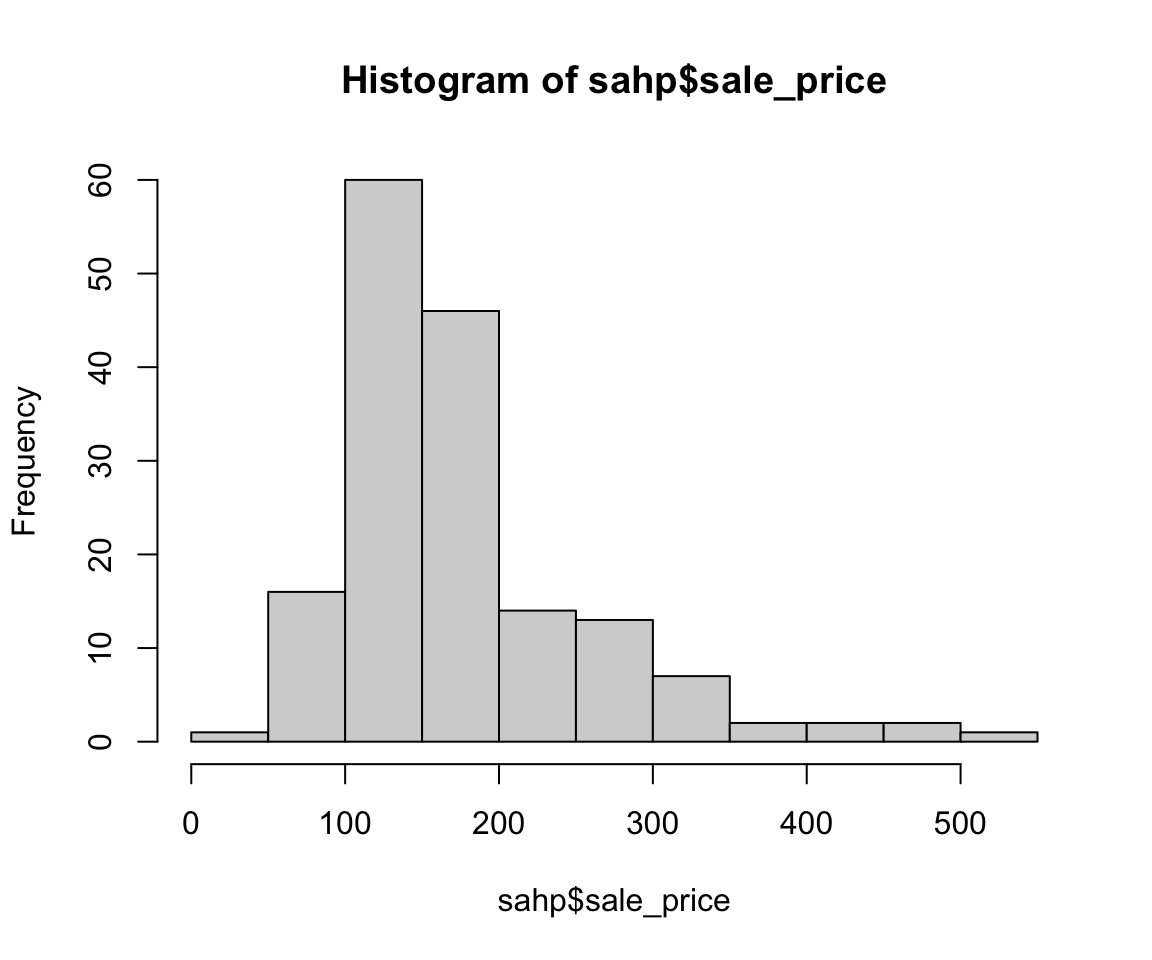 In addition to using the hist() function in base R. The geom_histogram() function in the ggplot2 package provides richer functionality. Let’s take a quick look. 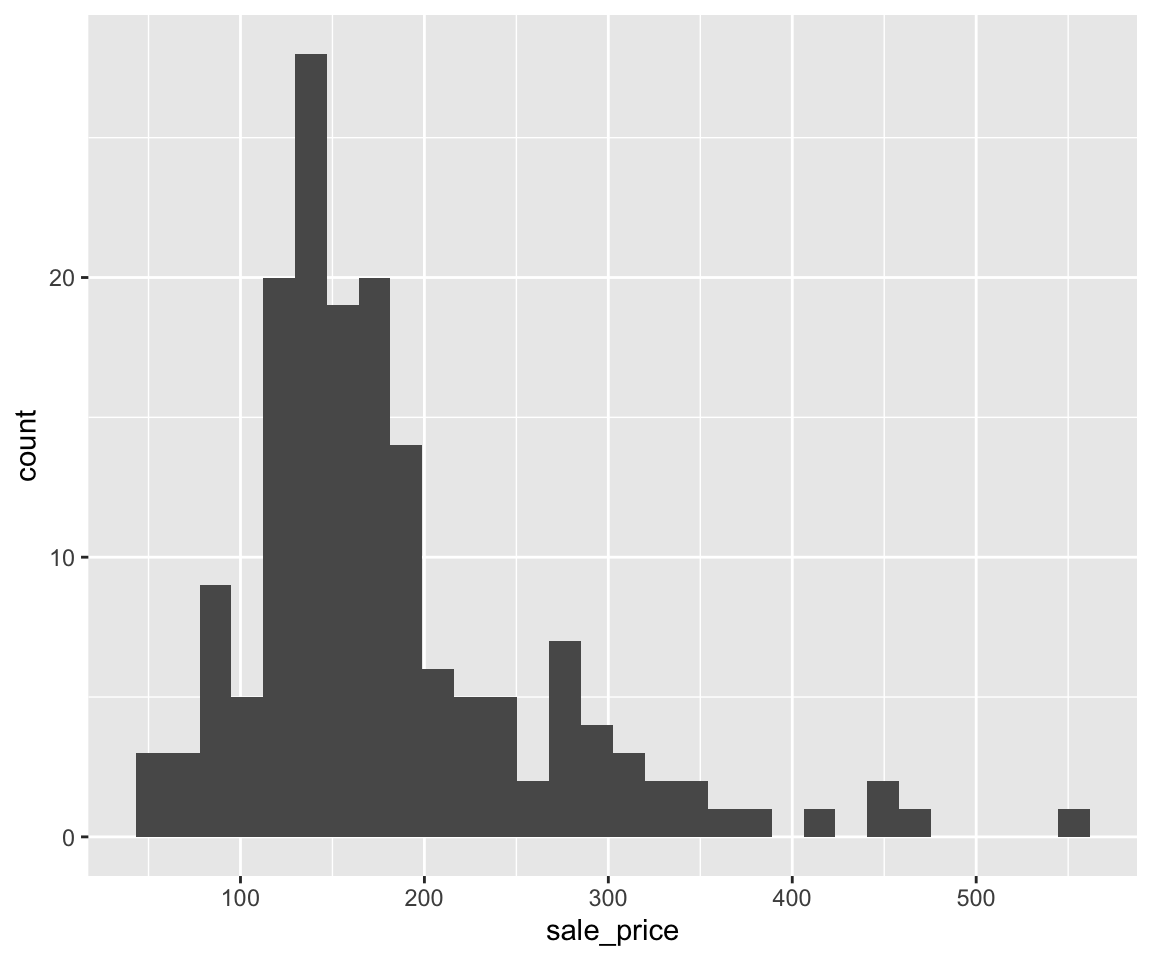 We could see a message, saying “stat_bin() using bins = 30” which implies the histogram has 30 bins by default. Next, we introduce three different ways to customize the bins.

a. Use aesthetic bins.

We can change the number of bins with the global aesthetic bins. 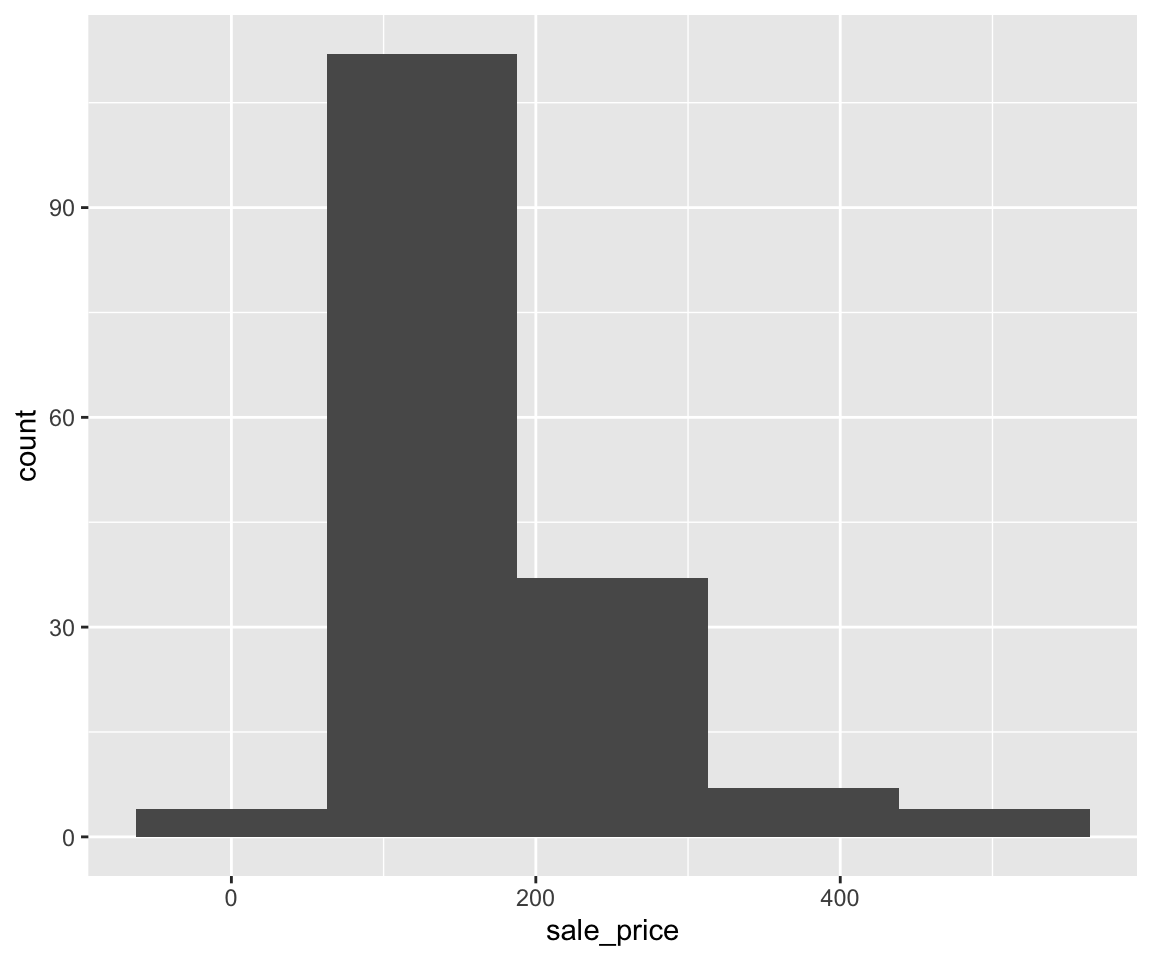 We can see that the histogram now has 5 bins and each bin has the same width.

And from the message, another way to change the number of bins is to specify the binwidth, which is another global aesthetic. 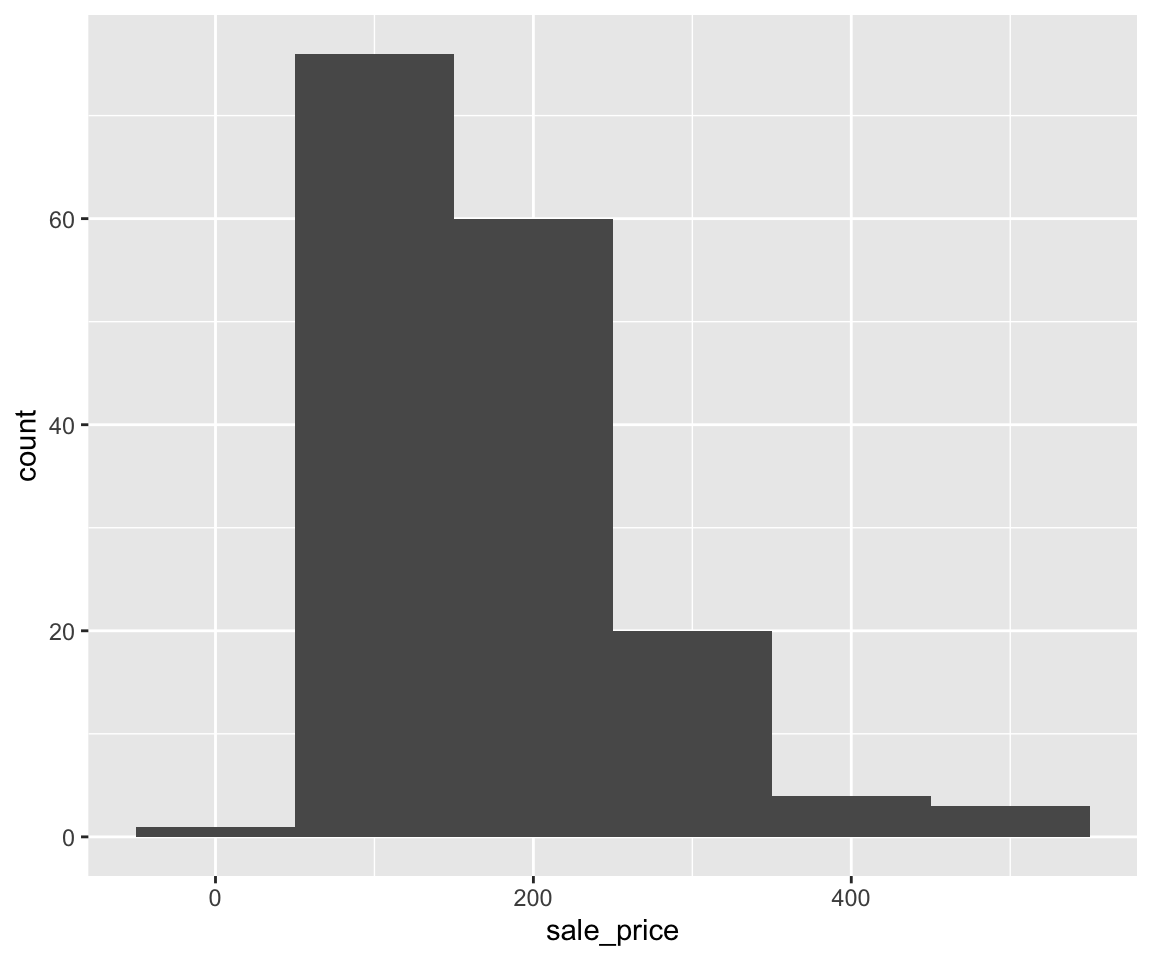 If desired, you can manually set the bins via the breaks argument in the geom_histogram() function. 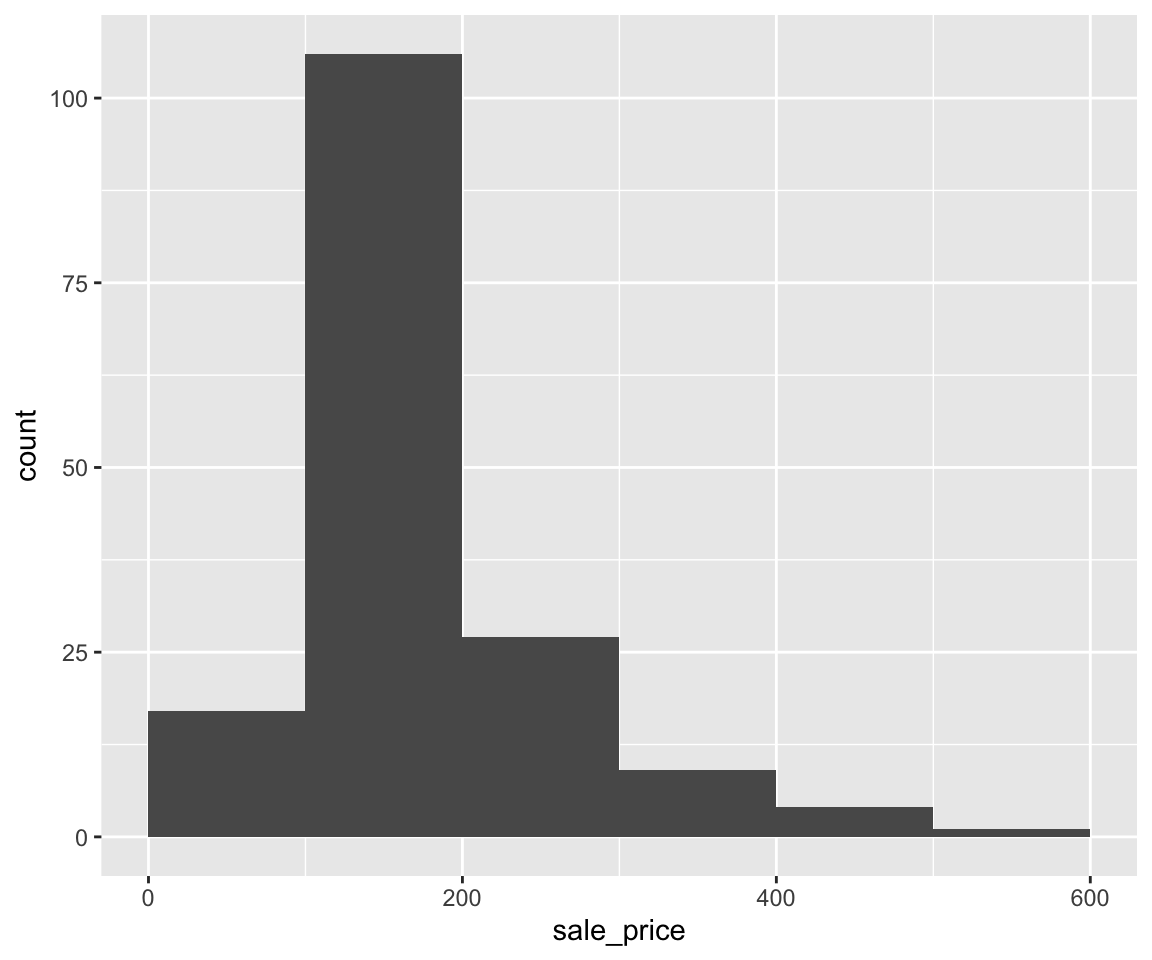 The breaks argument is a numeric vector specifying how the bins are constructed. Let’s verify the height of the first bin.

Next, we introduce the aesthetics in histograms, which are very similar to those in bar charts. For example, we can map a variable to the fill aesthetic. 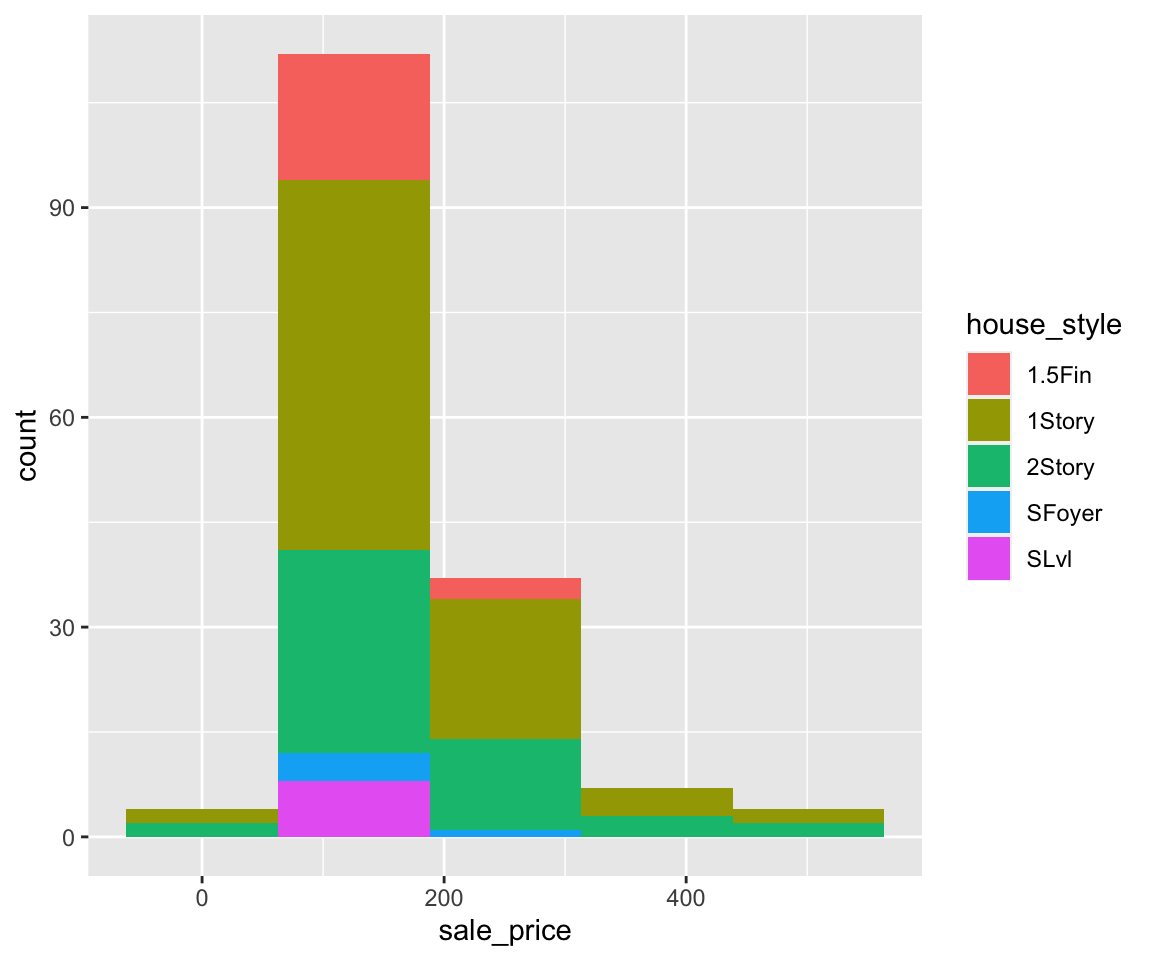 We can see that like the bar chart, the bar for each bin is now divided into sub-bars with different colors. The different colors in each sub-bar correspond to the values of house_style. And the height of each sub-bar represents the count for the cases with the sale_price in this particular bin and the specific value of house_style. Just like geom_bar(), we have a global aesthetic called position, which does position adjustment for different sub-bars. The default position value is again "stack" if you don’t specify it.

As expected, we get the same histogram as before.

The second option for position is "dodge", which places the sub-bars beside one another, making it easier to compare individual counts for the combination of a bin of sale_price and house_style. 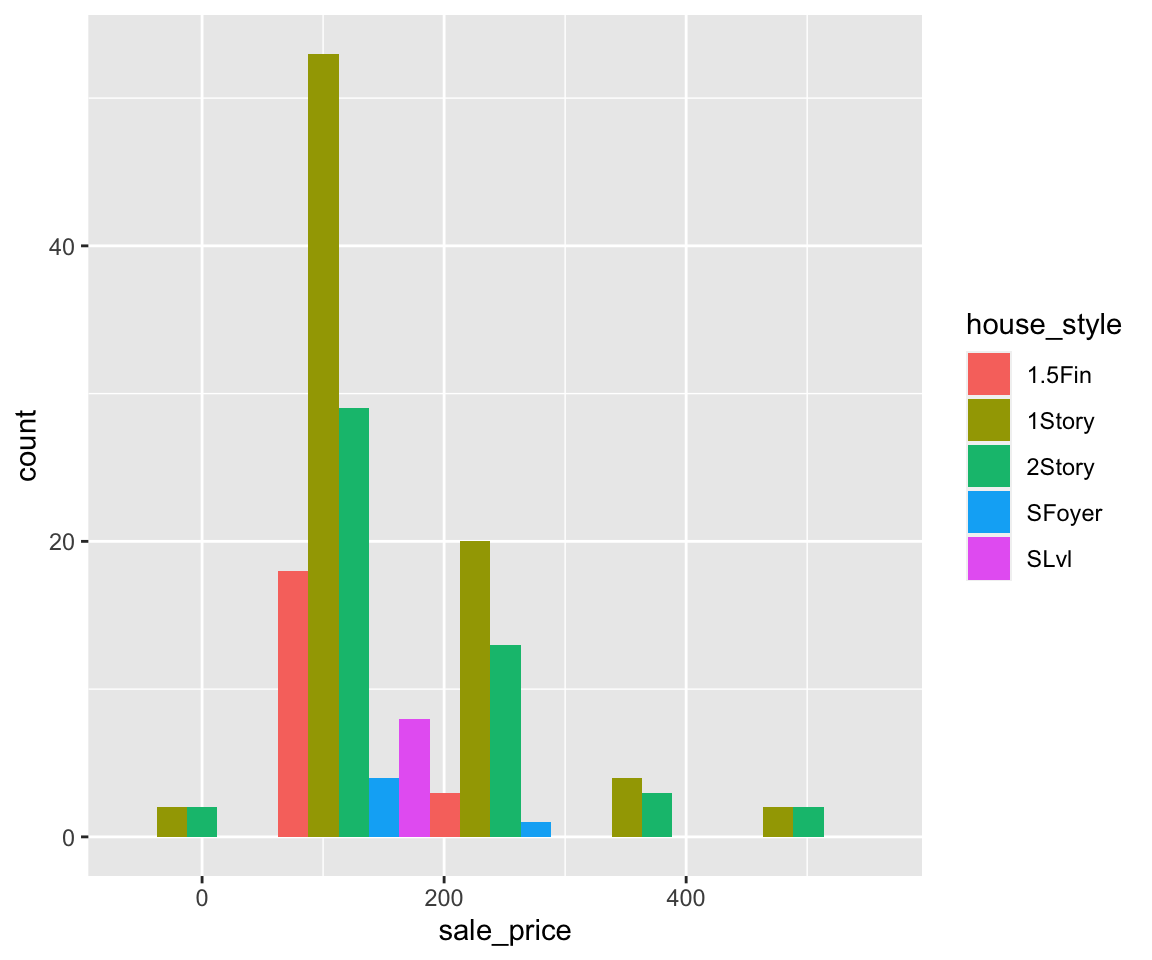 Another option for optional is position = "fill". It works like stacking, but makes each set of stacked bars the same height. 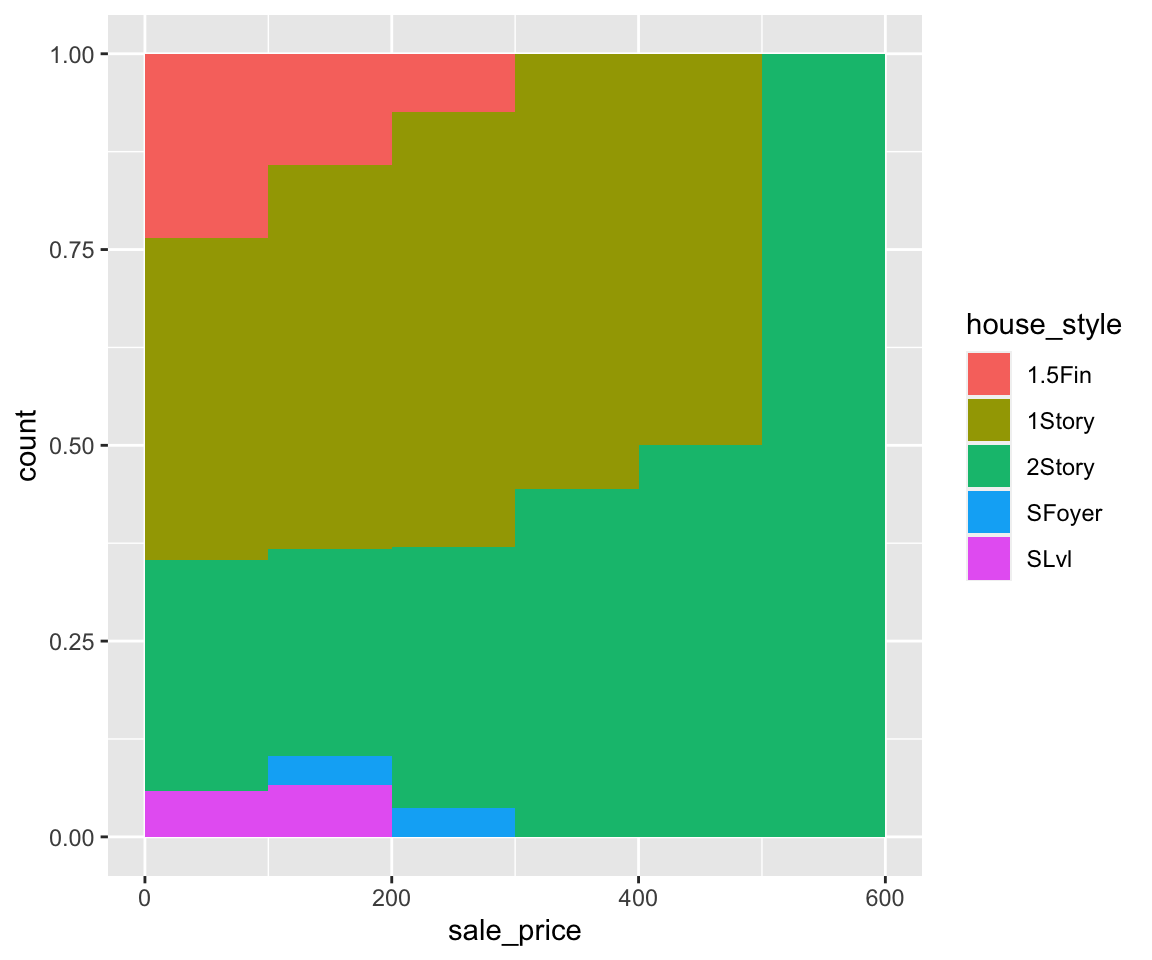 Just like geom_bar(), the y axis may be labeled as “proportion” rather than “count,” to be more precise. This makes it easier to compare proportions of different values of cut for different bins of price. For example, we can see that the proportion of house_style = "1.5Fin" is highest for the houses with sale price less than 100.

In addition to using histograms to visualize the distribution of a discrete variable, you can also construct a density density of variable using a proper normalization. To generate such a density estimate, you can add y = ..density.. as a mapping in the aes() function in geom_historgram(). Let’s see an example as below. 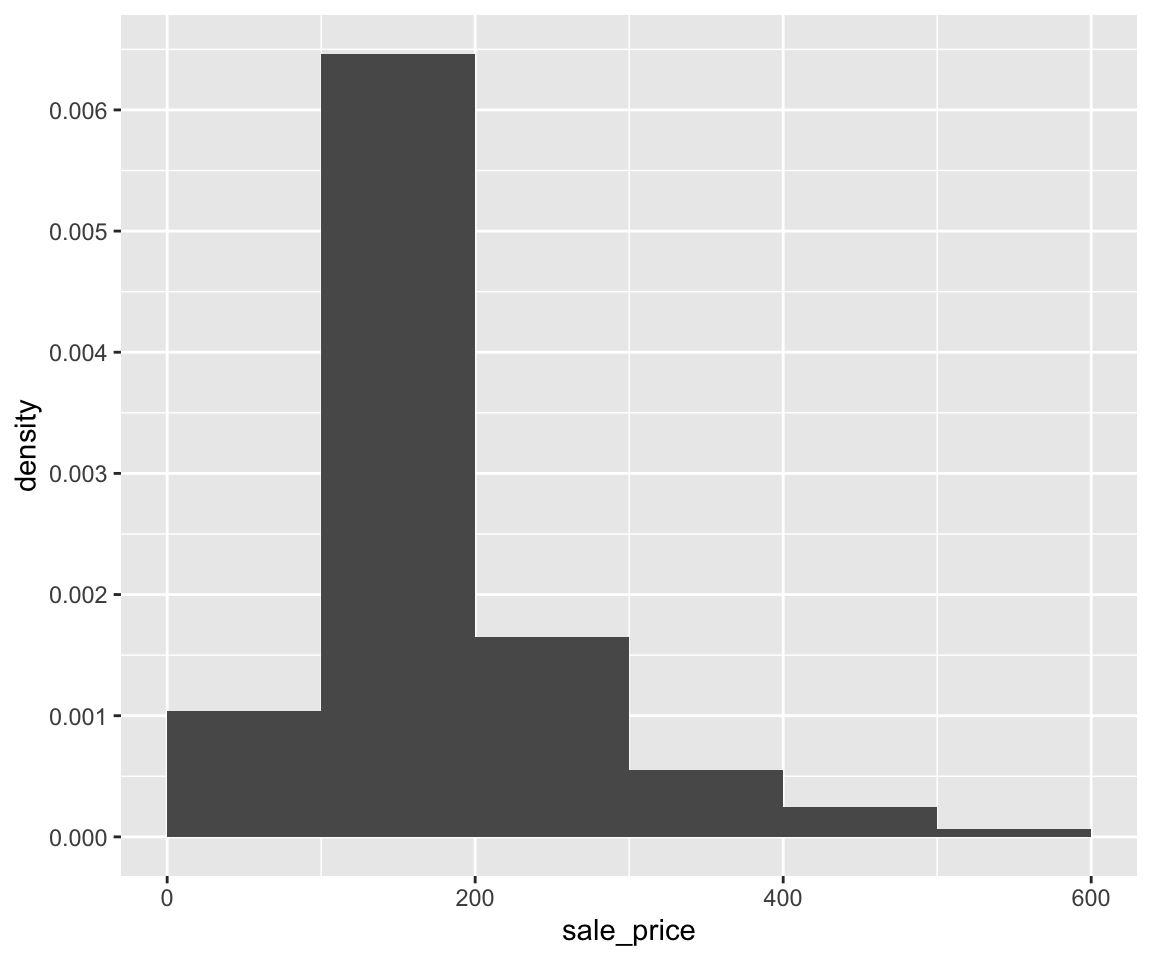 Here, we added the breaks arguments on the bins as well as on the y-axis.

You can see that the height matches the y axis for the first bar.