As a first step, you need to download R and RStudio, whose links are as follows. For both software, you need to choose the version that corresponds to your operation system.

RStudio is an Integrated Development Environment for R, which is powerful yet easy to use. Throughout this book, you will use RStudio instead of R to learn R programming. Next, let’s get started with a quick tour of RStudio.

After opening RStudio for the first time, you may find that the font and button size is a bit small. Let’s see how to customize the appearance.

On the RStudio menu bar, you can click Tools, and then click on Global Options as shown in the following figure.

Then, you will see a window pops up like Figure 1.2. After clicking on Appearance, you can see several drop-down menus including Zoom and Editor font size, among other choices shown.

After adjusting the appearance, you need to click on Apply to save our settings. 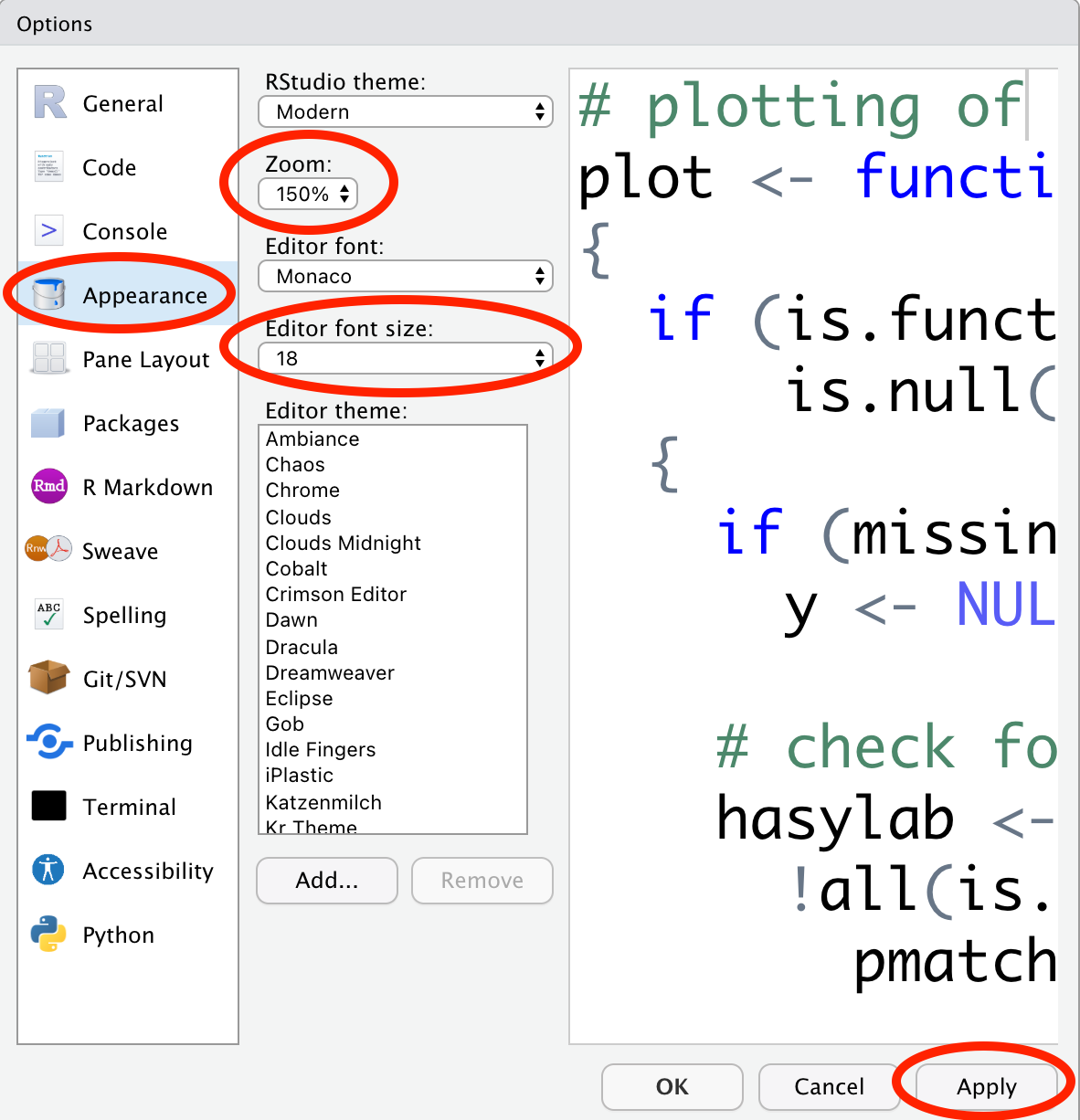 b. Four panels of RStudio

Now, the RStudio interface is clearer with bigger font size. Although RStudio has four panels, not all of them are visible to us at the beginning (Figure 1.3). 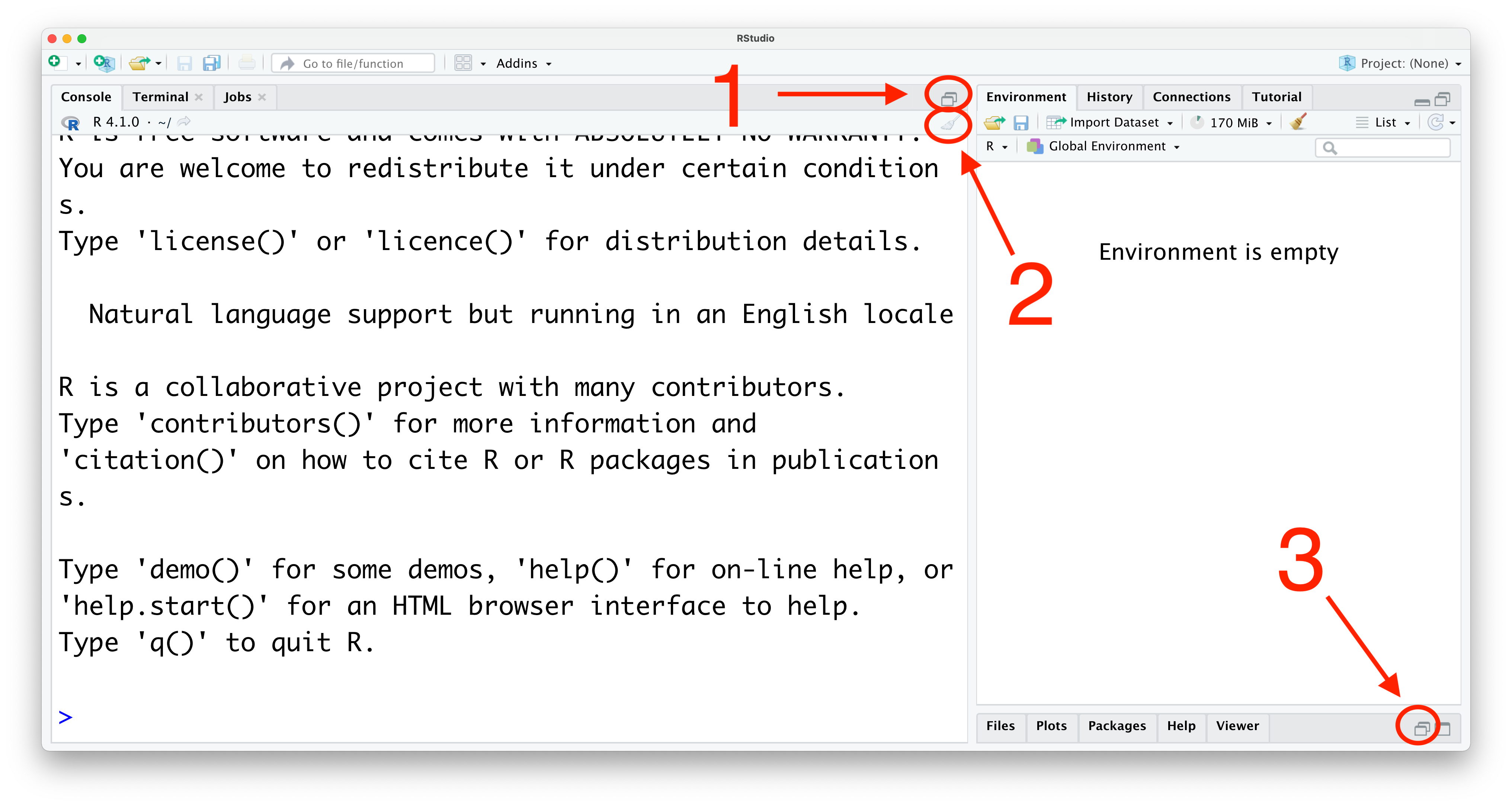 In Figure 1.3, we have labeled three useful buttons as 1, 2, and 3. By clicking buttons 1 and 3, you can reveal the two hidden panels.1 By clicking button 2, we can clear the content in the bottom left panel as shown in the following figure. 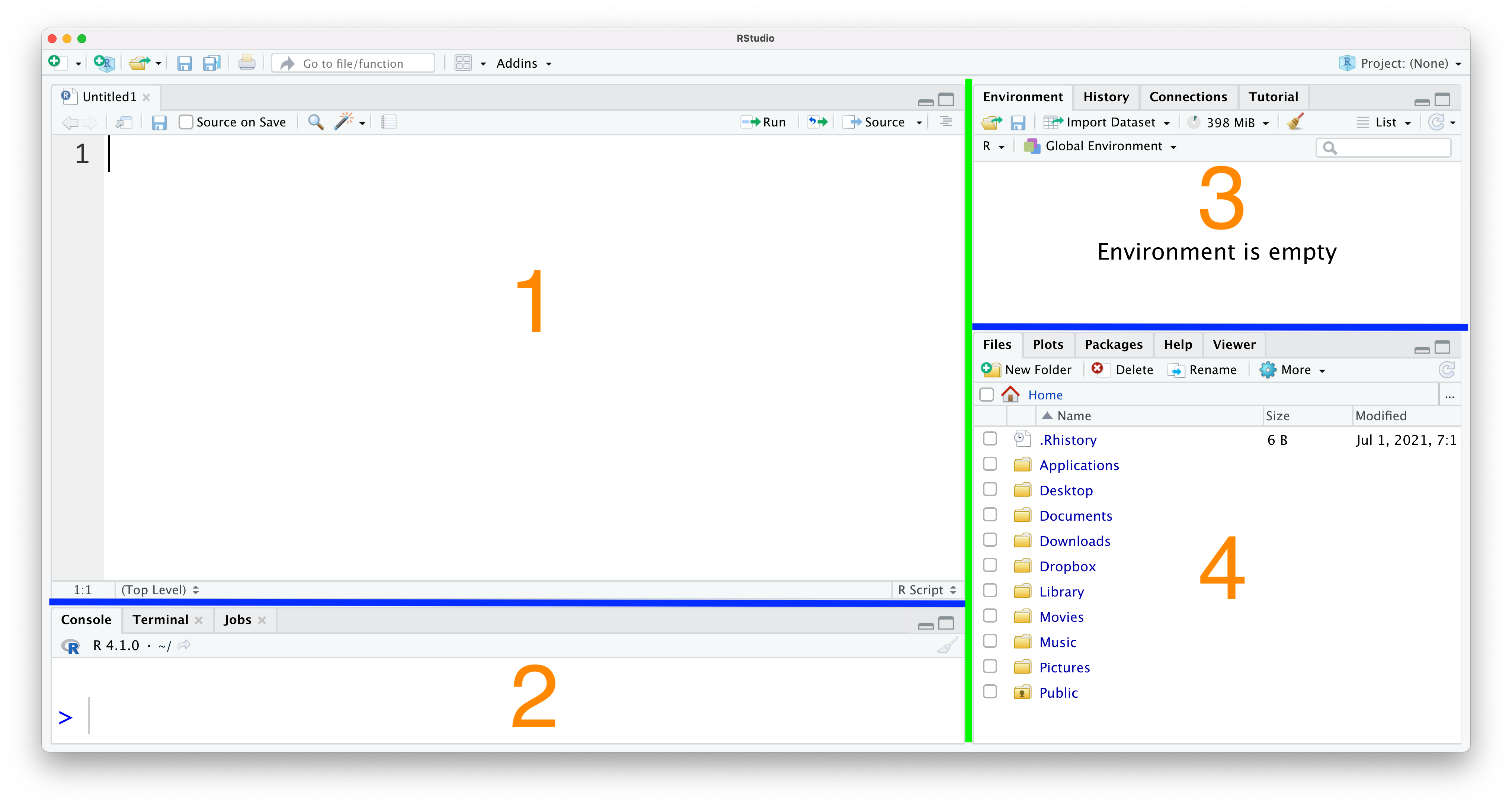 Now, let’s take a close look at all four panels, which are labeled as 1-4 in Figure 1.4. You can change the size of each panel by dragging the two blue slides up or down and the green slide left or right.

Now, let’s introduce the panel 2 in Figure 1.4, which is usually called the Console.

By clicking the mouse on the line after the > symbol, you can see a blinking cursor, indicating that R is ready to accept codes. Let’s type 1 + 2 and press Return (on Mac) or Enter (on Windows).

It is a good habit to add spaces around an operator to increase readability of the code.

Figure 1.5: Writing code in the console

Hooray! You have successfully ran our first piece of R code and gotten the correct answer 3. Note that the blinking cursor now appears on the next line, ready to accept a new line of code.

The curious you may found that there is a [1] showing before the result 3. In fact, the [1] is an index indicator, showing the next element has an index of 1 in this particular object. We will revisit this point when we introduce vectors that contain more than one elements.

Although the console may work well for some quick calculations, you need to resort to the panel 1 in Figure 1.4 (usually called the Editor) to save our work and run multiple lines of code at the same time.

d. Save R codes as scripts

The Editor panel is the go-to place to write complicated R codes, which you can save as R scripts for repeated use in the future.

Firstly, we will introduce how to run codes in scripts. Let’s go to the editor and type 1 + 2. To run this line of code, you can click the Run button. The keyboard shortcut of running this line of code is Cmd+Return on Mac or Ctrl+Enter on Windows.

RStudio will then send the line of code to the console and execute the code. You can also run multiple lines of code by select the lines and click the Run button or use the keyboard shortcut.

After finishing writing codes in the editor, you can save them as a script. To do that, you can click the Save button as shown in the Figure 1.8. The keyboard shortcut of saving files is Cmd+S on Mac or Ctrl+S on Windows.

Then you would see a pop-up file dialog box, asking you for a file name and location to save it to. Let’s call it lesson1.1 here.

After saving files successfully, you can confirm the name of the R script on the top.

Lastly, if you want to create a new R script, you can click the + button on the menu, then select R Script. Then you will see a new file created. Add a screenshot here Note that there are quite a few other options including R Markdown, which will be introduced in Section 12.

Now, you have had a basic understanding of RStudio, it is time to introduce R packages, which greatly extend the capabilities of base R. There are a large number of publicly available R packages. As of July 2021, there are more than 17K R packages on Comprehensive R Archive Network (CRAN), with many others located in Bioconductor, GitHub, and other repositories.

To install an R package, you need to use a built-in R function , which is install.packages(). A function takes in arguments (inputs) and performs a specific task. After the function name, we always need to put a pair of parentheses with the arguments inside.

While there are many built-in R functions, R packages usually contain many useful functions as well, and we can also write our own functions, which will be introduce in Chapter ??.

With install.packages(), the argument is the package name with a pair of quotation marks around it. The task it performs is installing the specific package into R. Here, you will install the companion package for this book, named r02pro, a.k.a. R Zero to Pro. The r02pro package contains several data sets that will be used throughout the book, and interactive exercises for each subsection.

After a package is installed, you still need to load it into R before using it. To load a package, you can use the library() function with the package name as its argument. Here, the quotation marks are not necessary.

Note that once a package is installed, you don’t need to install it again on the same machine. However, when starting a new R session, you would need to load the package again.